I haven’t had much time to spend with the ol’ blog here because I got married recently and all the preparations leading up to the wedding seemed to occupy nearly 100% of my free time. When I say “preparations,” what I mean is my having to be fitted for my suit again and again until the tailor finally got it right. It was exhausting and frustrating, but in the end, totally worth it.

So I’m married! My lady (Canongirl) and I finally tied the knot in Boston after after a five and a half year courtship. The day was everything we both hoped it would be and we’re finally “official.” We even have rings to prove it!

All the while the plans for the wedding were underway, CG had also asked one of our fellow Fwooshers, Ibentmyman-Thing, to make a set of custom action figures based on our own likenesses and some design ideas of her own.

All I can say is the results of this little project of theirs are INCREDIBLE. 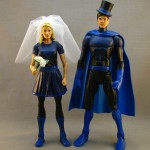 CG presented them to me as a wedding gift the morning of our wedding day and I was completely blown away. Benty’s sculpt work is unbelievable and the likenesses of both figures is CRAZY, almost scary, good. They both are so dead-on that it’s hard to believe. Every time I look at them I’m completely blown away.

I mean, I’ve ALWAYS admired Benty’s custom work, but this gives me a whole other appreciation for his skill. When making custom figures based on comic characters the likenesses are usually open to interpretation and any similarities are relative, but to so closely nail a sculpt of real people based on a couple photographs? Now, THAT is awesome and a demonstration of true talent, and I am absolutely humbled to be one of the subjects.

Outside of select movie and television stars, not many people get to see themselves rendered in action figure form. But thanks to CG and Benty, we’ve been able to see ourselves rendered in plastic. It’s a pretty great thing and one that I know I’ll be able to appreciate for years to come.

Now to find a special place in the display for these two!

Canonball enjoys haunted houses, drinking fake egg nog, checking books out from the library and not reading them, and taking part in various types of online nerdery, like contributing to The Fwoosh and The Short Box.
View all posts by canonball →
This entry was posted in Action figures and tagged IBentmyman-thing, The Fwoosh. Bookmark the permalink.