To Japan, a “Blesser”

This is the kind of thing I wish we’d see more of. 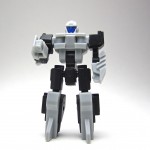 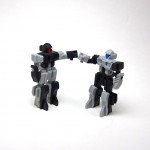 The figure, called “Blesser,” is a repaint of 2010’s Sidearm, a Targetmaster. The colors were inverted, the face was painted blue, and his “gun” alt mode was re-purposed into a fire extinguisher-type device. In doing so, Blesser became that rarity in not only the Transformers canon, but in most realms of popular fanboy lore – an instrument of salvation and hope, as opposed to a weapon, heroic or otherwise. Given the reason and circumstances under which this figure came to exist in the first place, Blesser’s role in the Transformers universe is wholly appropriate. 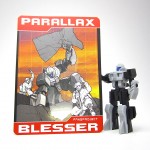 The figure arrived in a small gold envelope and came with a card that gives the character’s stats in traditional Transformers fashion based on skill, strength, firepower, etc. What’s cool about this card is that a “human partner” is mentioned by name. That “human partner” is the name of the individual who made the donation to the Red Cross, which is something that makes this figure even more special. It involves the fan in the figure’s narrative that transcends the role of meer collector/consumer. It’s a reminder that through the efforts of both Fansproject and the fan, a truly good deed was done, and Blesser becomes a tangible symbol of that – the willingness of people to take part in something where the only goal is to try and help and do some good. 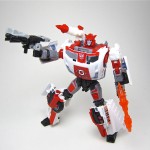 To unite a group as seemingly disparate as Transformers fans in response to a true tragedy is no small feat, so Fansproject deserves credit of the highest order for their efforts. Blesser will forever hold a special place on my Transformers shelves in remembrance of  the good we are all capable of.

Canonball enjoys haunted houses, drinking fake egg nog, checking books out from the library and not reading them, and taking part in various types of online nerdery, like contributing to The Fwoosh and The Short Box.
View all posts by canonball →
This entry was posted in Action figures and tagged Blesser, Fansproject, Red Cross, Sidearm, Transformers. Bookmark the permalink.

3 Responses to To Japan, a “Blesser”