I will humbly admit I was wrong. 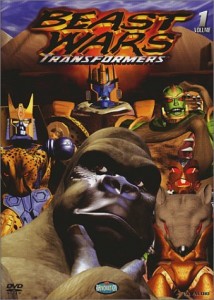 For years I had dismissed “Beast Wars” as the province of fans too young or too misguided to know what the Transformers franchise was really all about. I had never seen a single episode of the cartoon, mind you, and was basing my opinion on nothing more than the designs of some of the characters which I always thought looked so cheesy and forced. I mean, come on – Megatron turns into a t-rex, which I’m willing to buy, but the t-rex head becomes his HAND? That’s it? It seemed like such a lazy design choice to me. I couldn’t get over it and that served as a huge barrier to me ever giving the series a chance. And I have to admit, names like “Optimus Primal” weren’t helping either. It was too cutesy, too contrived. Not to mention “Dinobot.” We already had a whole TEAM of Dinobots in the G1 series and now there’s a single character just named “Dinobot”? Not only was it too contrived, but to me it lacked imagination and as a result, there was nothing about the series that made me want to invest a single moment of time. 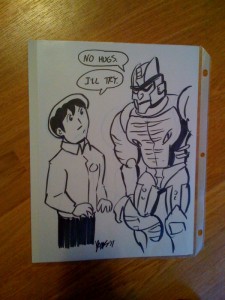 Fans on various message boards had been proclaiming the series’ merits for years, including “Shortpacked!’s” David Willis who, when Hasbro had a vote going to see what character would be added to the Transformer Hall of Fame, was championing Dinobot when the whole world knew that Soundwave was the sure thing. To my astonishment, Dinobot won, and all I could do was shake my head in disbelief. Who gives a crap about Dinobot? It was a fluke, not just an upset. It had to be (I can’t remember another time in my life when I had been THIS wrong about anything).

A short time after, I began watching the “Beast Wars” series via Netflix, and with a mix of great pain and great joy, I have to take back everything I ever said about Beast Wars because it has completely won me over. 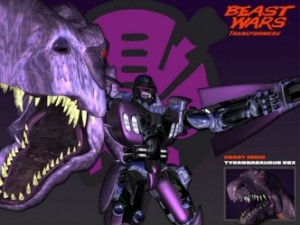 It didn’t hook me from the start, however. The first dozen episodes of the first season really weren’t all that great. You see, the series’ writers dove into the project without knowing a single thing about the original G1 series or comic. They were completely making it up as they went along and everything was arbitrarily named and the stories lacked urgency, but as the season progresses, it’s possible to almost pinpoint the exact moment when they did go back and learn about what had come before and then made the decision to tie the two series together in a meaningful way. Once this happens, the show finally finds its feet and has some direction. Not that it’s relying on G1 for credibility or anything, it’s just that it further expounds upon the Transformers canon by making itself an integral part of the story, as opposed to just being a piece of fiction that only exists within its own world with no consequence or impact on the overall story, as was my impression. 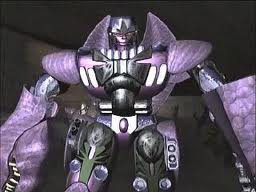 Once the series gets going, though, it’s awesome. And I even warmed up to Megatron’s t-rex fist-hand-thing. In fact, as season 1 winds down, there are moments that I actually prefer the Beast Wars Megatron to the original G1 Megatron. And that’s another thing – these two Megatrons? They’re not the same guy! I always thought they were, but they’re two completely different characters, but both are named “Megatron.” How they reconcile this is like this: Apparently the name “Megatron” comes from ancient Cybertronian scripture and refers to one of the original 13 – Megatronus Prime – who later becomes The Fallen. Both characters are said to have adopted the name so as to instill fear in their adversaries. Kinda cool. Again, kinda contrived, but kinda cool, too. And I have to come clean and admit that by the end of the series, Beast Wars Megatron easily bests G1 Megatron in my book insofar as compelling characters go, which is largely attributable to the fact that the creators were able to infuse the series with real character development, something we didn’t get with the G1 series. Beast Megatron is a much more fleshed-out and well-rounded character, and one that is impossible to resist, so long as you can get over his incessant use of the word “Yes…” He’s devious, intelligent, ambitious, self-serving, and charming as all get-out – the perfect villain. 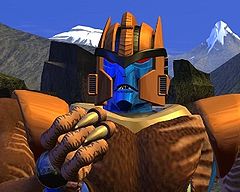 Back to Dinobot for a moment – as it turns out, he deserves that spot in the Hall of Fame for many reasons, but chief among them is the episode in season 2 titled “Code of Hero,” where he single-handedly defends a small group of humans from an attempted genocidal attack from the Predacons. Dinobot is victorious, but does not survive the confrontation (spoiler alert!). Dinobot’s dialog throughout the series was continually peppered with elements of Shakespeare, but it’s on his deathbed that the effectiveness of this is really driven home. It adds such weight and beauty to the scene that I found it hard to believe I was watching a kids’ cartoon, or that a kids’ cartoon would take such risks. With that moment and that episode, Beast Wars became so much more and truly transcended the confines of genre and media to become the strongest and most fully-realized piece of Transformers fiction. And Dinobot’s death affected me every bit as much as Optimus Prime’s death in the ’86 movie. Had I seen this episode as a kid, I probably would have been reduced to a puddle, but even with viewing it for the first time as an adult, it still had me all choked up.  It’s just so exceptionally well done. “Tell my tale to those who ask. Tell it truly, the ill deeds along with the good, and let me be judged accordingly. The rest… is silence.” 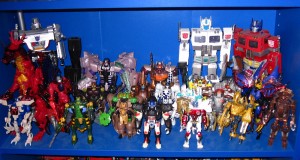 Now, because I am so enamored of the Beast Wars series, I naturally have to have the toys. Unfortunately, Beast Wars has been woefully under-represented in the modern Classics, Henkei, etc. lines, so I have to rely on what I can get in terms of the original figures. Cheetor and Dinobot are the only characters to have updates so far, but I’m finding that many of the later-period figures are not too shabby in terms of sculpt and articulation. And some, like Transmetal Rattrap and Blackarachnia, are downright wonderful.

I’ve dropped just about every other line I collect in order to give Beast Wars my full attention, and thanks to a few fellow board members, a local toy shop, BBTS, and ebay, I’ve managed to amass a decent collection in a short matter of time, and I’ve been having a ball in the process. 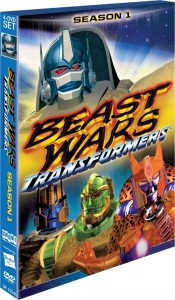 It was recently announced that Shout! Factory is re-releasing the complete Beast Wars series on DVD starting with season 1 on June 7th. I can’t wait to own it and watch the whole thing again from start to finish.

“Beast Machines” season 1 disc 1 arrived in the mail today. I hope it’s a worthy successor to this awesome series.

2 Responses to Beast Wars – A Reckoning!