I’m just a man. My resolve is only so strong. 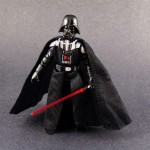 I swore off Star Wars a couple years ago. The toys, that is, but I haven’t seen any of the movies in years either, but that’s just a coincidence. Or is it? Like most people I know, I loved the original trilogy. But, then, we all know what happened. The prequels happened. And they were so fundamentally lousy that the disdain and, let’s be honest here, downright animosity I felt for them spilled over to the original trilogy. In effect, those damn prequels accomplished what was seemingly impossible – they turned me off to Star Wars, almost completely. They made me forget what I loved about the original movies.

Growing up, I was not a casual Star Wars fan – I was almost totally immersed in Star Wars 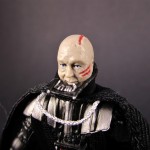 I didn't know his helmet came off until I opened the package and thought I broke it.

every day of my life from the ages of 4 to about 11. I had the toys, I had the pajamas, I had the t-shirts, I had the curtains, I had the Halloween costumes, I had the themed birthday parties, I had the talking alarm clock, I had the models, I had the coloring books, stamps, glasses, plates, shoelaces… you name it! Whatever product the brand was licensed to, chances are I had it. I was a Star Wars freak. Nothing came close to it. Not Marvel, not GI Joe, not even Transformers.

When Marvel Legends pulled me back into toy collecting when I was much older, I was momentarily tempted by Star Wars as well, but the prequels had done their damage and I would only occasionally spare them a quick glance in the toy aisles. That is, until the vintage packaging hit in 2010. 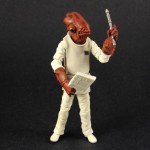 This fake vintage line really is marketing genius because it does a whopper on someone like me – someone who hasn’t given a thought to Star Wars in years, but has very fond memories of getting new Star Wars toys at Sears 30 years ago and holding and admiring the boxes before shredding them in the backseat of the car on the way home. The vintage packaging elicits so many memories from my youth that are so intrinsically tied to Star Wars that the pull of these new “vintage” toys is almost impossible to deny; it’s like a damn tractor beam. The AT-AT, the Snow Speeder, the individual figures…  everything old is new again, I swear, and I hate to admit what a sucker I am for it.

During one of Fred Meyer’s many toy sales around Christmas, I found myself buying Star 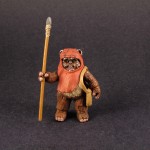 I don't care what anyone says about the Ewoks.

Wars figures again. I couldn’t help it. They looked so cool on the pegs and they were so cheap. I picked up Darth Vader, Wicket the Ewok, Admiral Ackbar, and a Gamorrean Guard and I’ve done a good job of drawing the line at just those four so far. I still have no intention of becoming a full-on Star Wars collector again because, frankly, I can’t imagine a bigger black hole to step into given the sheer amount of product available. There’d be way too much catch-up to worry about and the thought of starting is not an enticing one at all, believe it or not But picking up the odd, random figure here and there is something I can handle. Like I did with these four. 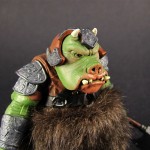 Gamorrean Guard has one of the best sculpts ever.

I will say that, so far, it’s really cool to have some Star Wars figures again. Almost all the stuff I had as a kid ended up in a landfill somewhere once I hit my teen years, but I do still have a few small mementos from that time. Nothing major – just a couple plastic cups that were somehow spared. I wish I had more of it, but I’m happy to have what I do. But seeing these figures on my shelves bring back a lot of warm memories of friends, my family, and all the places we all went together during my Star Wars years. Once quick glance at the shelf is an instant trip down memory lane, and I’m actually thankful for the opportunity to reminisce.