In theory, it’s fun getting a bunch of new stuff all at once.

The pace with which new stuff makes it to the shelves or to the online retailers is usually too slow for me to be able to exercise any semblance of patience, so I usually build the collection slowly one piece at a time. With each new figure I acquire, there’s typically that “honeymoon” period where I’m really excited about adding that new figure to the shelf and will spend time simply admiring the figure as it blends in with its comrades in the display. This honeymoon period varies in both length and intensity depending on how much effort I had to put in tracking the figure down or how much of an investment it was in terms of both time and money. My complete Fansproject Bruticus is a figure I’ve had for about three months now and I still marvel at it every time I pass that particular shelf, but then there are figures that I pick up on a whim, toss up on the shelf, and quickly forget about. Sometimes I’ll buy whole waves of figures all at once through online shops like Enchanted Toy Chest, but this practice is reserved for lines like DC Universe where the chances of actually finding them at retail are slim to none. It’s done out of convenience and out of a sense of futility, which is sad, really. 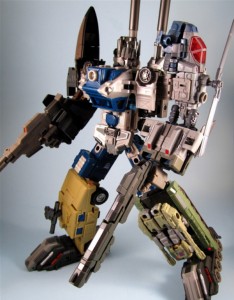 Recently I used Big Bad Toy Store’s “Pile of Loot” feature. Normally when I order from BBTS I like to have my item(s) shipped right away because like I mentioned earlier – I have no patience, but there was a number of Transformers items I wanted that weren’t all available at the same time, so I decided to try this feature out and see if I could stand the wait. 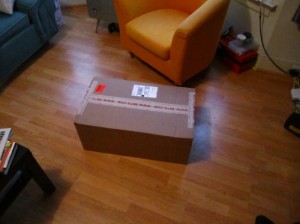 A big box filled with AWESOME.

Maybe it was due to it being a particularly busy time of year, but I was astonished to learn that waiting for my “Pile of Loot” to build wasn’t so bad after all. And I saved a bunch on shipping. My loot consisted of Unicron (the 2010 Takara version), Henkei Astrotrain, Fansproject Protector armor, and Fansproject Sidearm. Just four items, which really isn’t THAT big a deal I suppose, but it should be noted that Unicron is the size of a small child, so the box all this stuff arrived in was rather big.

To add to my Pile of Loot, two other packages I had been waiting on ALSO arrived on the same day as my pile of loot – Igear’s Delicate Warrior, which was a Christmas present from Canongirl, and a pair of Cobra Shock Troopers from the Hasbro Toy Shop website. So this ended up being one of the larger, single-day hauls I’ve had in a long time. It felt like Christmas even though Christmas had actually happened four days earlier. 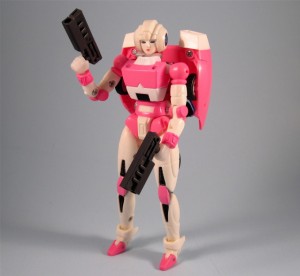 Opening this much stuff at once had an intoxicating affect on me. Since many of these are pretty serious collectible items that deserve a substantial amount of time to take in and appreciate, particularly Unicron, Delicate Warrior, and Protector, it was kinda crazy opening these three together. I had to keep shifting my attention from one to the other like a crazy person. As lame as this may sound, it really was a case of sensory overload. Each one was packed with too much awesome to be absorbed all at once.

Now I find myself sitting in front of my Transformers shelves just staring at my new additions. Just sitting there with a big, dopey look on my face. I can’t get enough of them and each feels like such a satisfying new part of the collection. I’m not sure I want to hold out and get so many at once again, but the amount I saved in shipping (Unicron would have cost $12 to ship alone, but the whole lot only cost $14) really makes this feature more and more appealing. I guess the real test will be to see if I can stand the wait when I’m not so busy.

Either way, the Pile of Loot feature is pretty awesome and I’m honestly kinda surprised it took me this long to try out.