When Toy Hunting is Annoying

Toy hunting is something I usually enjoy. The weekly ritual of hitting Target, Walmart, and Toys R Us (wash, rinse, repeat) looking for the newest Transformers, Marvel, or DC figures is just a part of my weekly routine. There’s always something to look for, and whatever success I have varies from week to week. Now, these three stores are the usual spots for the average colletor, but those of us in the Pacific North West are also fortunate enough to be surrounded by Fred Meyer stores which are also very fertile hunting grounds. Nine out of ten toys I buy, of those available at retail, come from one of these four stores. But every now and then toys show up in random places that throw my hunting routine all out of whack and push my sanity to the limits. 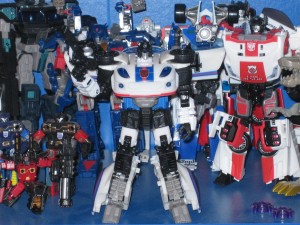 This past week two very much sought-after Transformers figures – “Reveal the Shield” Jazz and Tracks – have been showing up early at Walgreens stores. WALGREENS, for crying out loud. This is not a store that should be getting hot new toys first ahead of the big boys. See, there are plenty of Walgreens locations everywhere. Getting to the stores to do the hunting isn’t the problem. The problem is the way Walgreens stocks their figures/toys. Each store doesn’t receive a case of figures like every other store does – the Walgreens distribution centers get the cases, and then break the cases up and send each store what it needs. Walgreens has a one out, one in policy when it comes to stocking and restocking. Meaning if they sell one Transformer, then they get one Transformer to put back on the pegs with their store shipments. Say a new Transformers wave comes in a case of four (four different figures), and a Walgreens has just sold one Transformer and is getting a restock. It could be any of the four figures from that case that will be sent to that store, and there’s no way to know which it will be. Realistically, ONE case could be split among four stores throughout the city, which makes hunting down one or two figures decidedly inconvenient. It’s a royal pain-in-the-ass, is what it is. I managed to find Jazz, but Tracks still eludes me. And I am so sick of going to Walgreens after Walgreens when the odds are definitely not in my favor of finding it. Ugh. It’s taken toy hunting into new realms of depressing hell. Seriously, if you want to feel like you hate yourself in a jiffy, spend an afternoon going from Walgreens to Walgreens. MAKE. IT. STOP. 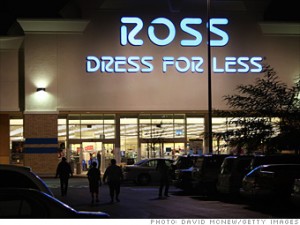 Ross stores have also been added to the “route” this past week as well. Some Ross stores have been receiving Transformers Ultra Class figures – Hardhead, Powerglide, and Skyfall – that were Walmart exclusives a year ago. These figures sat around most Walmarts virtually untouched for months, even on clearance. Then a new upgrade set was made for Hardhead by a third party company and suddenly a shelf-warming repaint became a very in-demand figure almost overnight, fetching anywhere from $65 to $100 on ebay. It’s nuts. Then, out of nowhere, someone in California finds a Hardhead at a Ross for $15, and suddenly every Transformers fan is going bananas running from Ross to Ross in search of this very elusive figure as well as the other two. The typical Ross has a toy department no bigger than the average port-a-potty, so they’re not exactly getting a lot of these, if any at all. Most sightings have been for only two of these Ultras at a time, one of which MIGHT be a Hardhead if that store happened to have the luck of the draw. AND, on top of this, Ross isn’t exactly known to restock. They just sell what other stores couldn’t, so if a store received one Hardhead, that could very well be the only Hardhead that store receives, thus making the competition for these fierce between not only collectors, but scalpers who are aware of the sure-fire “cash in” opportunities that accompany such a figure. This is something that will drive even the most dedicated and resilient toy hunter stark freakin’ INSANE. And I was almost to that point. 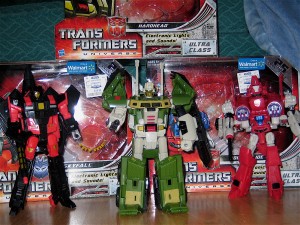 Hardhead (center) and his Ross-dwelling companions.

On “Grey Saturday” (the day after Black Friday) I rolled the dice and drove to a Ross that is really nowhere near where I live, but still within driving distance. I walked in not expecting to find jack-diddly-squat on this fool’s errand, but what’s the first thing I saw on the shelves? Hardhead. HARDHEAD! It was the only of these Ultra figures in the store and it was just sitting there. On the top shelf. At the front of the store. Where ANYONE could have seen it and snatched it. Needless to say, I practically dove for the thing and bolted to the register and then to my car like Smeagol clutching the precious. MY precious!

It doesn’t happen often, but sometimes toy hunting can take my beloved hobby and turn it into something I wouldn’t inflict on my worst enemy. The lengths we go through to build our collections as collectors is worthy of serious sociological study, in my opinion, and it’s something I can’t decide is hilarious or depressing. It all depends on the context, I guess, but all I know right now is I’m still hunting down a Tracks, so I’ll be hitting more Walgreens this week. Son of a bitch.

Canonball enjoys haunted houses, drinking fake egg nog, checking books out from the library and not reading them, and taking part in various types of online nerdery, like contributing to The Fwoosh and The Short Box.
View all posts by canonball →
This entry was posted in Toy collecting and tagged Fred Meyer, Hardhead, Jazz, Powerglide, Ross, Skyfall, Target, Tracks, Transformers, Walgreens, Walmart. Bookmark the permalink.

2 Responses to When Toy Hunting is Annoying