Toys I Can’t Believe We Got: Transformers Generations Straxus (Darkmount)

Straxus, or “Lord Straxus,” was a character who briefly appeared in the original Marvel Transformers comic in the early 80s, but not really anywhere else for a very long time. He was a despotic Decepticon ruler, similar in temperament and demeanor to Megatron, who would even go on to share Megatron’s body in a sort of “man with two brains,” schizophrenic mess after a fight with Blaster left him without a body. What’s interesting about Straxus is he was a Marvel creation entirely, rather than a Hasbro creation that Marvel would adapt for the comic. He wasn’t based on a toy like the others and few kids at the time were even aware of him unless they were reading the comic. 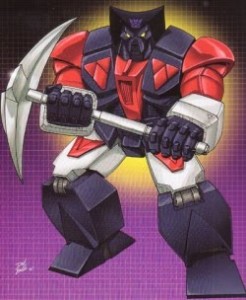 Though Straxus was a fairly well-established character in the Marvel comic, he never appeared in the cartoon and there has never been a toy based on the character until Hasbro’s release of “Darkmount” in the 2010 Generations line. Because of copyright issues, however, the figure could not be called “Straxus,” so Hasbro went with “Darkmount,” which was actually the name of the tower Straxus ruled from on Cybertron. Makes sense, I guess, but still lame. In most cases where Hasbro can’t use the original name, like in the case of Jazz, they adapt it to something like “Autobot Jazz.” That way they don’t have to totally rename the character and then try to sell fans, who would be screaming bloody murder, on that new name. So that makes me wonder why they didn’t just go with “Lord Straxus” or “Decepticon Straxus” in this case. Maybe it was the easier path to take, legally, coupled with the fact that the name “Straxus” isn’t as established a name as, say, Jazz or Megatron? Who knows? What I do know is they can name this figure anything they want – at the end of the day, it’s still Straxus. 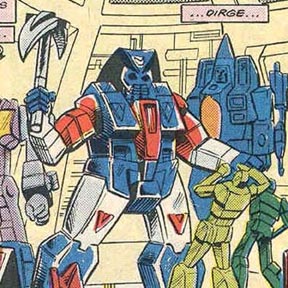 Straxus being all despotic.

This figure has been a long time coming, nearly 25 years, and I can’t help but think the release of this figure is Hasbro’s way of giving one heck of a tip of the hat to fans who’ve been waiting for this since 1985. I can remember how absolutely surprised and stoked I was when the first promo images appeared. Even though I was never one of the more vocal fans who’ve been asking Hasbro to produce a Straxus for years, I can certainly appreciate the significance of this release. It really is very cool and I love being able to look at my Decepticon shelf and see Straxus among them. 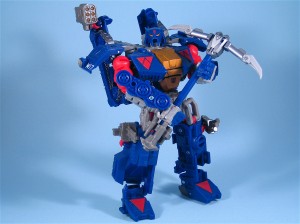 The figure’s bot mode is awesome. It bears a fantastic likeness to his comic appearances and even has his trademark axe that integrates into his alt mode. 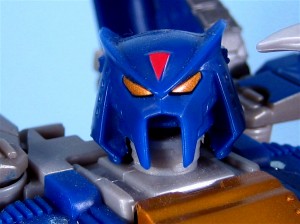 For his alt mode, Hasbro went with a tank-type thing that has an Earth-y look to it rather than a Cybertronian look. Since Straxus ruled from a fortress on Cybertron, he never had an Earth-mode in the comic, just a weird Cybertronian space cannon thing, sort of similar to Galvatron’s alt mode. So, like Hasbro’s recently released Blurr, Straxus’ alt mode is a bit of a re-imagining, basically. It’s decent enough, I guess, but I really have no use for it. In bot mode he stays. 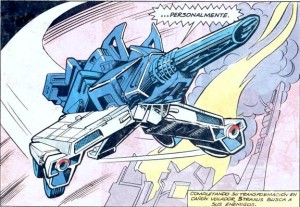 Straxus as a blue tank!

It’s so cool to finally have this figure, and it’s inspired me to hunt down the old Marvel series to read again after all these years. Can’t wait to reacquaint myself with Lord Straxus!

Canonball enjoys haunted houses, drinking fake egg nog, checking books out from the library and not reading them, and taking part in various types of online nerdery, like contributing to The Fwoosh and The Short Box.
View all posts by canonball →
This entry was posted in Action figures and tagged Autobot, Blaster, Blurr, Cybertron, Darkmount, Decepticon, Hasbro, Jazz, Marvel, Megatron, Straxus, Transformers. Bookmark the permalink.