There’s ALWAYS a Next.

Not too long ago, a friend came by our place for the first time and saw the collection for the first time. Because we live in a rather smallish apartment in downtown Portland, there are shelves with figures and carded figures on the walls EVERYWHERE. We’re used to it since we’re around it all the time, but whenever someone comes over for the first time, it’s definitely a “deer in headlights” moment. This friend, his name is Steve, also grew up reading Marvel Comics, so he does have a natural affinity for everything covering our walls and shelves, but it’s still something someone new to it has to spend some time to take in. This goes for everyone – A police officer once visited in order to get some information from me regarding an identity theft case I was involved in (as the victim), and couldn’t help but wander around in awe and even took pictures to show her brother. “He’s going to FREAK,” she said repeatedly as she moved around the apartment. It’s a common reaction. 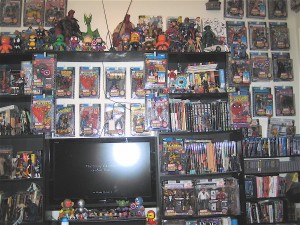 We had dinner, and as Steve continued to examine the shelves and as he gazed around the room, he asked me a question – “So… what’s your goal with all this stuff?”

The question kind of blindsided me.

I never thought about it in those terms before. A goal? I need to have a goal? I really didn’t have an answer for him and it took me a moment or two before I was actually able to blurt out anything at all just so it wouldn’t seem as though I was rudely ignoring his question. If I have a goal, and this would apply to most facets of my life, not just collecting, it would be to enjoy whatever it is I’m doing at any given moment. That’s it. So my motivation, the reason for amassing this collection, for spending time hunting down pieces of the collection, is simply that I enjoy doing it. That’s really all there is to it. There is no final endpoint off in the distance that when I meet it, I know I’ll have accomplished what I set out to do. I participate in this hobby because it makes me happy each day I’m involved in it. It’s the process that is satisfying, not necessarily the outcome. It can be argued that instead of having one larger, over-reaching goal, the acquisition of each piece is the meeting of a goal in itself, so while there may not be a single goal that drives me, there are instead many smaller goals that compel me to haunt the local stores in hopes of finding that specific piece to add to the collection. 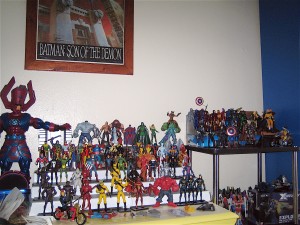 This can be a curse as well as a blessing, however. The double edge to this sword is that while I do enjoy the act of collecting, there really is no real end to it. With each figure I acquire, no matter how badly I want it, or for how much time I spend seeking it out, as soon as I have it in my hands and add it to the shelf, those feelings of desire do not go away – they are simply transferred to whatever figure I happen to set my sights on next. And that’s the thing – there’s always a “next.” I suppose this can be linked to a basic human survival instinct, but it really feels like a hamster wheel sometimes. Each time I think I’m “done” (I’m convinced that word has no meaning in this hobby), my eye catches something new and like reliable clockwork, my brain tells me, “Hey, guess what? You’re not done! Ha!” Even worse, I’m aware of the absurdity of it all, but that doesn’t sway me from engaging in this singularly bizarre behavior. But on the other hand, those on the industry side of the equation happen to be quite prolific, with new figures coming out each month from many different directions. In this regard, there’s always something to look forward to; there’s always something to be excited about, always something that will make me think, “Oh, cool!” as I sit glued to images of new toys on the internet and instill that drive in me all over again. And it’s those feelings that largely drive this. 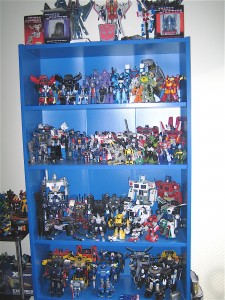 In my experience there is no ultimate satisfaction, there is no ultimate goal. If I complete one collection, there’s always another collection that starts hollering in my direction, issuing directives I can’t resist. it’s enjoyable, it’s maddening, and it’s very time-consuming. But at the end of the day, it’s pure fun for me. And really, what better goal is there than that?

Canonball enjoys haunted houses, drinking fake egg nog, checking books out from the library and not reading them, and taking part in various types of online nerdery, like contributing to The Fwoosh and The Short Box.
View all posts by canonball →
This entry was posted in Toy collecting and tagged DC Universe Classics, Marvel Legends, Marvel Universe, Masters of the Universe Classics, Transformers. Bookmark the permalink.

3 Responses to There’s ALWAYS a Next.