This past Labor Day, Fred Meyer stores had a doorbuster sale featuring DC Universe Classics figures marked down from $12.99 to $0.75 – that’s not a typo – 75 CENTS. And that wasn’t all – there was a coupon for an extra 10% off which brought the price down to 67 cents each. Nuts, right? That’s what I thought, and even though I am currently totally caught up with the line, there was no way I was not going to take advantage of this. I figured that if I bought 30 figures at 67 cents each and sold them all on ebay for a few bucks each, I stood to make a hefty profit – enough to pay for my hobby for the rest of the year, easily. This thought is what drove me to hoard as many figures as I could, but once I had them, the thought of profiting off them like that didn’t feel right; I actually felt guilty for some reason I can’t explain. That feeling led me to pursue other avenues, ones that would help me turn this seemingly opportunistic moment into something better.

The sale price, I’m assuming, had to have something to do with DC’s 75th anniversary because nothing about it makes sense otherwise, and it brought a lot of people out of the woodwork. I did some scouting the day before the sale to see which stores I should hit and to put together a “route” for myself. Every store I went to had between 10 and 20 figures on the pegs, mostly from wave 12 (the Darkseid wave), but there were others mixed in here and there. I chose my first spot because of the sheer number of figures that were there – over 20. I knew I could do the most damage if I started there and made my way to other stores following that one. 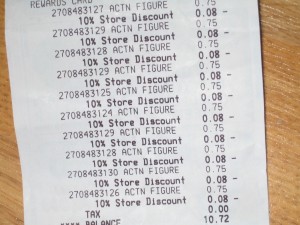 With a sale like this, naturally I wasn’t alone with my plan. The stores open at 7:00 a.m. and I made sure I was there a good 20 minutes before the doors opened. I was the first one there and I waited for quite a while by myself, but as 7:00 approached, others began to show up. I had hoped I was there only one there for the toys, because there WERE other sales, but that hope was quickly dashed. One of the people behind me in line called out to an employee who was making his way across the parking lot.
“How many of them action figures you got? Is there a limit?”
“Great,” I thought, “I have competition.”

An employee approached the doors a few minutes early and opened the door. The people behind me were engaged in conversation, so I was able to zip in, grab a shopping cart, and bolt to the action figure aisle. An employee watched as I began loading the figures into my cart and said, “Hold on now; I wanted some of them, too.” I was tempted to respond with a “Tough luck,” but I slowed down as I dumped figures into my cart. Then I hear someone behind me say, ‘Hi, Tim.” I turn and it’s Lefthook from The Fwoosh. He came for the sale as well and I suddenly felt very guilty about the way I was loading up my cart. I offered to give him whatever he wanted from my cart, but all he asked for was a Spectre. We both made our way to the register, marveled at the fact that the sale was even happening in the first place, checked out, and then went our separate ways to hit more Fred Meyer stores. 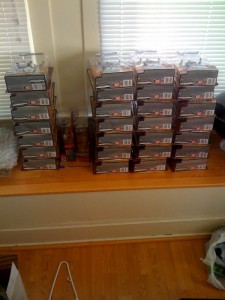 A motherload of DCUC figures!

I had purchased 30 figures and it had cost me $20.10. Crazy. 30 figures would normally cost $390 if I had bought them at Fred Meyer (where the regular price is $12.99), or even more if I had bought them anywhere else. 30 figures in the trunk of my car looked RIDICULOUS. They took up the whole trunk and would spill out each time I opened it to stuff more figures in. I had taken a couple garbage bags along with me in the event I ended up with a haul like this, and I was able to stuff both of them full. I made my way back to our place with the two giant bags, showed the haul to CG, cracked up laughing, and went back to bed; it was still really early on a day off!

I had initially planned to just toss them all up on ebay and rake in all the money I could. The thing is, though, I really didn’t NEED that money for anything. I have a good job, my fiance has a good job, so we’re not hard up at all at the moment. I can comfortably afford my hobby, so as I thought about what I was about to do, the reality that I was doing it out of nothing but greed set in. And I started to get a weird feeling in my stomach. It felt selfish to me, suddenly. TOO selfish. I had to come up with a better idea, and the perennial Toys for Tots charity leaped to mind. I was going to donate them. And with that decision, that weird feeling in my stomach quickly disappeared.

My initial plan was to just dump them all in a donation bin, but JohnnyShadow from The Fwoosh had an even better idea – sell them to some collectors and donate the money, which could potentially be more useful to the charity, instead of just dumping the figures into a bin. It made perfect sense – collectors get some figures they want and the charity gets the money. I couldn’t argue; this was a fantastic idea and that’s what I did. I was able to raise $175.00 to give to Toys for Tots – not bad for an initial investment of $20.00!

I think this was the right thing to do, and it’s something I feel pretty good about doing. Sometimes, when it comes to toy-hunting, I fall into a “must get everything I can” frame of mind, and the emphasis is just that – what *I* want and what *I* can get and that was definitely the case this time – buying up figures I didn’t need or want just because they were cheap and the price lit a fire under whatever greed-oriented impulses I have. Fortunately, with a little bit of thought and some great advice, I was able to turn this little episode of psychotic toy-hunting into something positive for someone else – disadvantaged children who will hopefully have a nicer Christmas with the aid of this money. It’s not much in the larger scheme of things, but it’s something.

Canonball enjoys haunted houses, drinking fake egg nog, checking books out from the library and not reading them, and taking part in various types of online nerdery, like contributing to The Fwoosh and The Short Box.
View all posts by canonball →
This entry was posted in Toy collecting and tagged DC Universe Classics, Fred Meyer, Spectre, Toys for Tots. Bookmark the permalink.