Mauricio reads my blog and sent me an email after reading the entry that featured him – “The Zartan Follies.” It gave him a chuckle and he confessed that when he “disposed of” my Zartan, he felt as though he had murdered something (and that gave ME a chuckle). It was awesome talking about GI Joe collecting with him and reminiscing about all the old times. He came out to visit us this past weekend and it was a lot of fun to see him again. We took him all over Portland to see the usual touristy-spots, as well as some of our personal favorites, like Ground Kontrol, Powell’s Books, Pyro Pizza, Voodoo Doughnuts, and, most notably, Billy Galaxy – a vintage toy shop on Burnside that specializes in vintage action figures like Star Wars and GI Joe (nudge nudge). During his visit, and after more than 20 years, Mauricio brought closure to our Zartan debacle the only way he possibly could.

To get things started, we made a quick toy run on Friday morning after dropping CG off at work. I thought this would be a good way to cover a lot of ground and to show him a good deal of the city. This ended up working out really well for me because – I swear – he is like some kind of magic-voodoo-good-luck charm when it comes to toy hunting. Our very first stop was a Target that has really never been all *that* good, but worth including in the route as a “just in case” spot. Well, it got a quick upgrade from “just in case” to “Holy crap! Goldmine!” this particular morning. As I approached the usually bare Marvel Universe pegs, the first thing I saw was an Archangel “Death” variant. I practically crapped my pants right there. This is a figure I never expected to see on the pegs due to rarity and the prices it usually fetches on Ebay. And what was right behind the Archangel variant? A Havok variant. I just about lost my mind. I grabbed the pair, along with another Skrull and two more AIM Soldiers (army building!), and rushed to the next aisle to show him what I found and to politely, yet forcibly, suggest he move to Portland and accompany me on all my toy runs. Like I said – this Target has never been one of the more fruitful spots, so it must have been because of him. It must have. 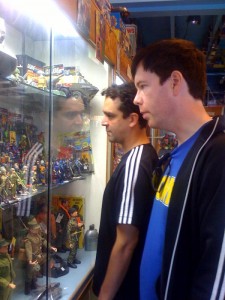 Mauricio and I admiring some vintage GI Joes.

Our next few stops were almost as productive as our first. I found several figures I had been hunting down for some time – a 6″ Iron Man Mark IV with the interchangeable Tony Stark head, a Transformers Animated Wreck-Gar, a GI Joe Mercenary Wraith clear blue variant, a Marvel Universe unmasked Iron Patriot variant, and a Marvel Universe green Hulk. Mauricio picked up some figures as well, most notably a Jungle Viper from the GI Joe Pursuit of Cobra line. He was also a good dad and picked up some toys for his kids and would call them to tell them he had gifts on the way for them. What an awesome dad.

Following our productive-as-hell toy run, we met CG for lunch and then strolled around Downtown Portland. I made sure we made a stop at Billy Galaxy because I knew he’d get a kick out of seeing all the toys we both had in our youth on display in an almost museum-like environment. We admired each display and reminisced about all of them. I not-so-subtly pointed out Zartan in the GI Joe display before we made our way out. He knew darn well what I was hinting at because, hell, how could he not? Later, while back at our place, he paused and asked,
“If I were to buy you that Zartan, would that make up for everything?”
“I think if you were to buy it now, after all these years, it would be hilarious and give this whole thing some closure.”
“OK. I’m gonna buy it. Does Billy Galaxy take Discover?” 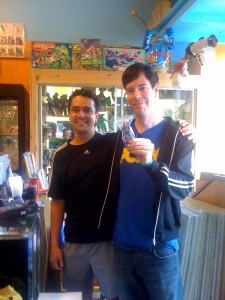 Mauricio and I with a \”new\” Zartan. This moment was over 20 years in the making.

We checked some prices on eBay before heading back to the store. Boxed Zartans were going for hundreds of dollars, but loose and complete ones were going for around what Billy Galaxy was asking – $50 or so. We headed back to the shop and asked the owner to get the Zartan for us from the case. Mauricio paid, and graciously handed him to me right there at the register. Holding that Zartan then, in that moment, felt like victory. Mauricio had totally redeemed himself. 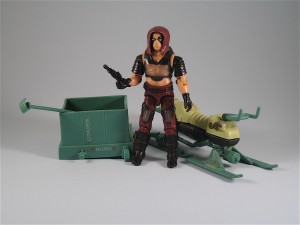 An original Zartan. Mine again, thanks to Mauricio.

After all these years, I have an original and complete Zartan again, and I have to give Mauricio a lot of credit for going so far out of his way to do this. It made his visit seem all the more significant and it seemed to somehow reinforce the importance GI Joe collecting had always been in our friendship. I proudly display my new Zartan on our main set of shelves in our living room. It’s the only vintage Joe I have on display and not in a big box in the closet. This was my favorite Joe figure when I was a kid, and it’s so awesome to finally have another. Thanks, Mauricio.

Canonball enjoys haunted houses, drinking fake egg nog, checking books out from the library and not reading them, and taking part in various types of online nerdery, like contributing to The Fwoosh and The Short Box.
View all posts by canonball →
This entry was posted in Toy collecting and tagged Archangel, Billy Galaxy, GI Joe, Havok, Marvel Universe, Mercenary Wraith, Zartan. Bookmark the permalink.