Posted on September 3, 2010 by canonball

I do a good job of keeping my spending under control when it comes to toys for my collection. If I feel like I’m spending too much, then I go through what I have and toss a few pieces up on ebay to either recoup some money or to generate new money to spend on new figures and toys. Sometimes, however, so much stuff comes out at once and it all adds up so quickly – like the fall of ’06 when Toy Biz was cranking out the last of their Marvel Legends line, or the fall of ’09 when waves of DC Universe Classics were coming out every four to six weeks. Ouch. But even then, it’s still relatively easy to manage and keep under control. It’s possible. And none of the toys I collect on a regular basis are really that expensive, so rationalizations and justifications come easily when it comes time to whip out the ‘ol debit card. Transformers, however, are a different story. I often joke that it would take a six-figure income to be able to fully enjoy collecting Transformers without experiencing the night terrors that are known to accompany total financial panic. I don’t even buy a lot of them and it’s very seldom that I buy complete waves – It’s the awesome Japanese imports that make me feel as though I should be out each day selling plasma. I love collecting Transformers, but it can be a frustrating endeavor because of the cost. 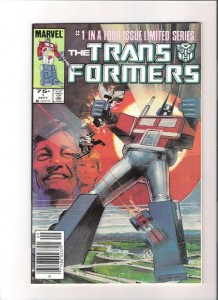 My first Transformer was Gears, a minibot, purchased way back in 1984. I got him from a store called “Toys for Joy” in upstate NY and I can remember having a hard time talking my mom into this one. I had a hard time talking myself into it, as a matter of fact. Transformers hadn’t become a thing yet – their status as craze de jour was still about a good six months out, so there was no hype yet, no real pressure to get any of them. And they were plentiful at the time. I had been aware of them through the TV commercials (remember those?), and naturally I was intrigued. I went for Gears because I liked the blue and red color scheme. Also because I had picked up a copy of “The Transformers” #1, the Marvel comic. I hadn’t read it yet, but I could remember the cover as I stood there looking at gears. I was pretty sure Gears was on the cover, so I thought he was a major character, and I thought it would be a good idea to start with a major character. The joke would eventually be on me because Gears would go on to be the most minor character of them all with very few appearances in the cartoon and his comic appearances were brief and very few and far between. Despite all that, his major selling point was that he was cheap, like $3.50, if I remember correctly. The ones that really caught my eye in the store that day were Prowl and Soundwave, but they were much more expensive and I knew I didn’t have a prayer of talking mom into those. Gears was a possibility, though. 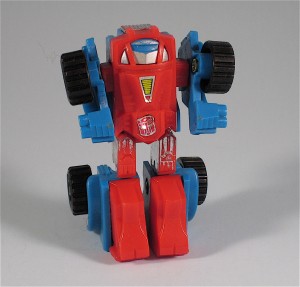 Mom was cool with me collecting the lines that I did, and up until 1984 it had really just been Star Wars and GI Joe. The trouble came when I would attempt to branch out to something new. She was always resistant and I now know that was because she knew me and knew once I had a taste, I’d want the whole shebang. So when I showed her the $3.50 Gears I was holding, she made sure to quickly scan the rest of the Transformers on the shelves to see what she was really getting herself into. Prices have always varied greatly with Transformers when it came to class sizes – basically, the larger the toy, the higher the cost, and there have always been lots of figures spread across all possible class sizes. She knew darn well I was trying to bait the hook with an inexpensive one, and once that fish was in the boat, I’d be working her for the more expensive ones. Gears was a means to an end for me that day, a foot in the door.

“I’ve got you so you just want everything you see that’s new,” she said while basically turning me down.

“But they’re for use with GI Joe!” Never underestimate the power of a good rationalization.

“Is that right? Or is that just what YOU say?” she asked. 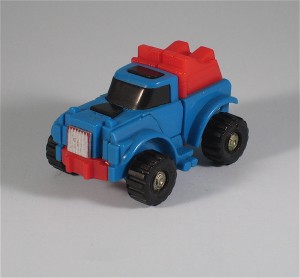 Gears' alt mode. I still have no idea what the red things that become his legs are supposed to be in this mode.

I eventually wore her down and I left the store with Gears. It was a hard won victory, and it wasn’t long at all before I was holding Prowl in my hands and following my mom around the store with him. And that was it. For the next couple years, I was a Transformers fiend. This was a simpler time to be a Transformers collector – there were no Japanese imports, no convention exclusives, no expensive 3rd party custom-made toys, just whatever Hasbro shipped to the stores. So while Transformers was certainly one of the more expensive toy lines to collect in the early days, the daunting financial commitment it would evolve into was still a number of years off.

Canonball enjoys haunted houses, drinking fake egg nog, checking books out from the library and not reading them, and taking part in various types of online nerdery, like contributing to The Fwoosh and The Short Box.
View all posts by canonball →
This entry was posted in Toy collecting and tagged Gears, Optimus Prime, Prowl, Soundwave, Transformers. Bookmark the permalink.