Growing up, my best friend Mauricio and I were rabid GI Joe collectors. I was into the line first, having began my collection with the very first, pre-swivel-arm-battle-grip wave, and I like to think it was my influence that finally inspired him to pick up his first figures with the fourth wave. His first figure was Wet Suit and he brought it over to my house to show off even before I was aware that wave had started hitting. Naturally, I begged him to trade me for it, but he wouldn’t. Thus, the competition we would enjoy for new, and old, GI Joe figures would fiercely begin. 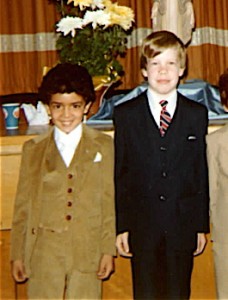 Mauricio and I all dressed up for a school event.

Mauricio’s parents spoiled the both of us rotten when it came to GI Joe figures. His family traveled around town in a big van and I can remember spending whole Saturdays in the back of the van with him, his younger brother, and older sister going from mall to mall. At the mall, his parents would let us roam free, and I later came to suspect this was secretly their way of getting us out of their hair for a few hours. We would run around the stores having fun and getting into trouble, but if we were to find new GI Joes, then we would go nuts trying to find his parents so we could “show” them (beg them to buy some for us). Once we did track them down, his parents would often treat us to all of them. Seriously – if we found nine new figures, then we each got nine new figures (if there were doubles, that is). It was AWESOME. Obviously, I loved going out to the stores with them on weekends.

My mother would often treat Mauricio to figures much the same way his family would treat me. I invited him to come out (we didn’t call it “toy hunting” then) with us often and the same rules applied – if new figures were spotted, we would get some of them. It was rare we would be treated to entire waves, but we would get three to four of them each, on a good day. It was awesome, and tearing into the new figures in the back of the car on the way home together was the best.

The trouble would start if I happened to find a figure he didn’t have or vice versa, especially if it was a figure we both wanted badly. By the fifth or sixth wave, some of the older figures became kind of hard to come by and this is when things became… sketchy. We envied each others’ collections and would sometimes “borrow” a figure here and there without permission. OK, the truth is we would flat-out steal from each other. We would. We both knew this, yet we were somehow OK with this. All it really meant was we needed to keep a close eye on our figures when the other was around. It was really weird, but we both understood the rabid lust that filled our brains when it came to these things, and being that we were so young, a true sense of what’s right and wrong had not fully developed; the end justified the means. If I wanted a new Major Bludd and Mauricio had one, then I was getting that new Major Bludd when he wasn’t looking and would then play dumb when questioned about it. This went both ways for a long, long time. We would catch each other in the act, or find the evidence, and laugh if off and reclaim our property from the other. It was almost like a game for us. See, I can fully appreciate how demented a friendship this sounds based on this practice, but it made sense and was right for us, as messed up as it was. 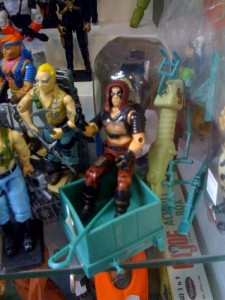 The original Zartan. This one is for sale at Billy Galaxy in Portland, OR (hint*hint).

Our mutual understanding came to a screeching halt, however, when I believed Mauricio to have helped himself to a key figure that I would never be able to replace – Zartan. My favorite GI Joe character, and my favorite figure from the line, was Zartan. I devoured every appearance he made in the Marvel comic and I hunted the figure down when it came out like I hunted no other figure. He was the crown jewel of my collection even after he was a couple years old and fancier figures had been released, like Serpentor. I loved Zartan; I loved all the Drednoks, actually, even the lame ones like Zanzibar. And when Zartan went missing, the gloves came off.

As the line trucked on into the late ’80s, Zartan was no longer in production and became quite rare. Mauricio had his own Zartan, so I never worried him snatching mine away. The others I watched like a hawk, but I never worried about Zartan. Maurice had spent the day at my house one Sunday and we did all the things we normally did – played with our Joes, explored the outdoors, tortured the neighborhood kids, etc. It was a school night, so he had to go home early; normally he would have just spent the night. About an hour after he’d left, I got my Joes out to play with them before bedtime and I couldn’t find Zartan. I quietly panicked, but assumed I was overlooking him because why would Mauricio take a figure he already had? He wouldn’t, so Zartan must be somewhere. I tore through my box of figures, then my bedroom, then the living room, and finally I came to just one conclusion – Mauricio must have taken him. I was freaking out. The value I had placed on this figure was quickly becoming clear to me and I had to get him back, so I called Mauricio on the phone. He answered, and I didn’t even say “Hello.” I got straight to the point.

“I know you took my Zartan.”

“Well, I can’t find him.” My voice was shaking.

“I swear I didn’t. Maybe he’s outside or in the family room.”

The conversation went on like this for a few more minutes, and I finally had to give up my line of questioning. Maybe he didn’t take him. I mean, he already HAD one. Maybe I really did just lose him. I had to resign myself to the possibility that maybe this was all my own fault. It was a bitter pill to swallow. 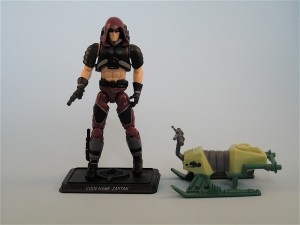 Zartan’s absence left a large void in my collection. He was not to be found on store shelves anymore, but I knew where I could get another one – Mauricio’s house. I needed his and from that moment on, I set out on a single-minded mission to steal his Zartan. The problem with this plan was he knew how freaked out I was from Zartan’s having gone missing, and seeing as how Mauricio and I understood each other so well, he knew darn well I was going to try and take his. That meant Zartan was never out of Mauricio’s sight. Never. This made things decidedly inconvenient.

I kept trying, though. I would even do downright shady things like show up at his house when I knew he wasn’t home. His family would always let me in and show me hospitality, and I would pay that hospitality back by trying to ransack Mauricio’s collection in search of his Zartan. I’m not proud of that now, but at the time it felt like I didn’t have a choice. When he knew he wasn’t going to be home he would have the audacity to HIDE Zartan on the off-chance that I would stop by. He even clued his family in on what he knew I was trying to do. They would never leave me alone with his collection. Not for a second. It drove me crazy.

I finally had to give it up. I couldn’t get that Zartan, and it certainly wasn’t for a lack of trying. We never took another figure from each other from that point on, and I never did learn if he had actually taken mine or not. Until a few years later, of course. 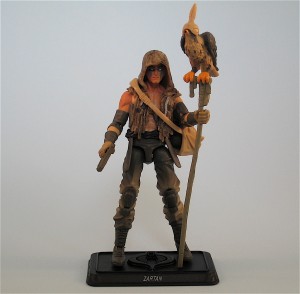 The “Pursuit of Cobra” Zartan. Not too shabby!

It was a couple years after we had both quit collecting and had moved on to other interests when he finally told me the truth about Zartan. He DID take him. Not because he needed the figure, but because he needed just a PART of the figure – one of the pads that clipped onto his thighs. He took the whole figure to get just that pad, and when I called him freaking out on him for the possibility of his taking the figure, he decided he needed to get rid of the evidence. So he tossed Zartan into his family’s wood stove and melted him down to get rid of the evidence. I was beside myself as I listened to his confession. I laughed because I didn’t know how else to react. My gut had told me for years that Maurice had taken him, but now I finally knew. I had closure. I was also a little bit impressed because I couldn’t believe Maurice would go so far as to burn the figure to a cinder in order to never be caught with it. It really blew me away, and I would never forget it.

I don’t harbor any ill will from this incident, but it has become a defining point in our friendship. We’ve been friends for about 32 years now, and I’ve come to cherish this friendship. We live on opposite sides of the country, but we still talk regularly. I do, however, love that I can still hold this over his head at times. It cracks me up that after all these years, all I have to do is say “Zartan” and, almost immediately, we’re kids again in competition with our collections.

Canonball enjoys haunted houses, drinking fake egg nog, checking books out from the library and not reading them, and taking part in various types of online nerdery, like contributing to The Fwoosh and The Short Box.
View all posts by canonball →
This entry was posted in Toy collecting and tagged Action Figures, GI Joe, Toy collection, Zartan. Bookmark the permalink.

2 Responses to The Zartan Follies