I recently bought some new GI Joe figures. I’ve quit the line at least four times over the years (decades), but somehow Hasbro keeps managing to reel me back in. My fiancee, Canongirl, and I were out looking for the new wave of Hasbro’s Marvel Universe line when I happened upon these new Joes randomly in a Portland Fred Meyer store. As we made our way down the aisle, I glanced at the GI Joe figures on the pegs, as I always do, but I’ve been relatively unimpressed with them in recent years and a quick glance is usually all I’m willing to spare them. But what I saw on these particular pegs forced me to take a second glance, then a sustained stare, and finally I had to pick one up and then rifle frantically through the pegs to get a look at all of them. They were kinda… spectacular. And they made me quickly lose interest in the Marvel Universe figures I had intended to buy in the first place. In fact, the Marvel Universe figures looked downright lame in comparison. 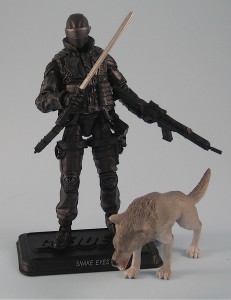 But I didn’t decide to buy the Joes right away. I’m not currently collecting Joes, so I made myself put them down and I left the aisle clutching a Storm/Nightcrawler Secret Wars 2-pack as I searched for my fiancee who had moved on from the aisle shortly before me to look for new running shoes. While slowly moving through the shoe department looking at sneakers, I couldn’t stop thinking about those GI Joe figures I had just put down, and the Secret Wars 2-pack looked less and less appealing every time I looked at it. Then I became worried – there was another fellow, about my age, hovering around the action figure aisle while I was there, subtly stealing glances at the Joes I was holding. For some reason, at that moment, I was OK with that, despite being a collector and therefore a territorial psychopath when it came to toys in the store. As I stared blankly at a pair of Asics, I recalled this man’s presence in the aisle, and it dawned on me that the figures may very well all be gone, and suddenly that was not OK, so I sped back to the aisle. I feverishly scanned the pegs, and sure enough – Snow Job and Firefly, the two that had first captured my attention, were gone. 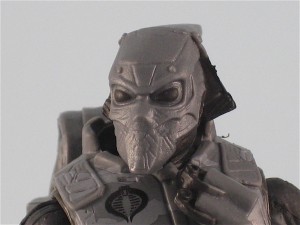 I took that as a sign. it wasn’t meant to be. Fair enough. I dejectedly began to stroll out of the aisle doing my best Charlie Brown after the tree ate his kite impression, when I noticed Snow Job and Firefly sitting on a shelf about five feet from the pegs. That guy had put them down, too, evidently. Now THIS was the *real* sign. I scooped them up, grabbed one each of whatever was left on the pegs, and made my way to the register, not even giving a second thought to what I had actually gone to that store to look for (Marvel who?). And they were on sale! How could I NOT get them? Truthfully, I DID try to talk myself out of them, even then, after so much turmoil. Canongirl logically pointed out two things – the sale, and the fact that I can always return them if I were to change my mind. Made sense. Suddenly, I was a GI Joe collector again. 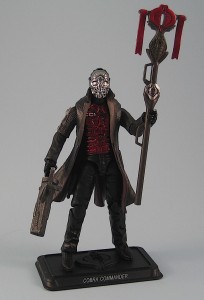 I’ve been buying GI Joes on and off again ever since they were first introduced way back in 1982. That year Star Wars was still going strong, but after almost six years of toy-aisle dominance, there was a hunger for something new, and maybe even a bit different. Star Wars had largely been comprised of weird looking creatures, robots, and aliens – just the thing to capture a 6-year-old boy’s imagination and send his “let’s pretend” instincts into hyper drive. When GI Joe first hit, however, there was none of that. The first wave consisted of a very unassuming group of soldiers who, in comparison to the legions of Star Wars characters, looked positively bland. Many of the figures shared the same, or very similar, base bodies, they were all an olive green (with the exception of Snake Eyes and Scarlet), and their weapons were as generic as could be. The bad guys, the Cobra soldier and officer, were a bit more appealing design-wise, but not by much. So what the heck was the attraction? In a word, it was realism.

GI Joe had a grit to it that Star Wars didn’t. These were toys meant to be taken outside and played with in rugged terrain. The scenarios I created for them felt more “real,” and therefore more vital, than the movie reenactment rut I had been caught in with Star Wars. But as much fun as I was having with these, it wasn’t until wave 2 hit that Joe fever would really infect my brain. 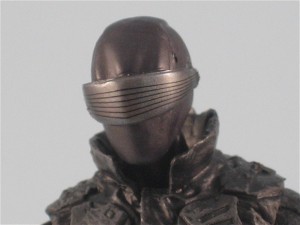 My mom and I were at Toys R Us the day before Easter. I took the corner and saw an endcap covered with GI Joes I had never seen before – Destro, Gung Ho, Snow Job, Major Bludd, etc. I needed these, and concocted a reason as quickly as I could to justify the purchase should mom do the unthinkable and say no. The following day was Easter Sunday, so rationalizing these as “Easter presents” made perfect sense to me (sure, what kid wasn’t rolling in “Easter presents” on Easter Sunday?). Fortunately, my flimsy-as-hell rationalization proved to be enough, and my mom allowed me to get three of them, so I selected Gung Ho, Snow Job, and Destro. These figures were miles ahead of the first wave. Each was completely unique and was bursting with personality. The line had taken a major corner with just this second wave, and Joe fever fully had me in it throes from then on.

I would go on to collect the line faithfully until the animated movie was released, and only very sporadically after that. GI Joe remains one of the toy lines I remember most fondly from my youth, so I’m excited there’s a new line that has brought me back and has given me the opportunity to reacquaint myself with an old favorite. 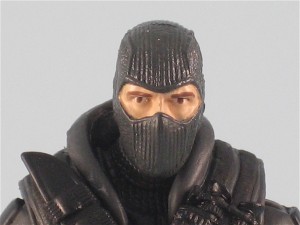 Canonball enjoys haunted houses, drinking fake egg nog, checking books out from the library and not reading them, and taking part in various types of online nerdery, like contributing to The Fwoosh and The Short Box.
View all posts by canonball →
This entry was posted in Uncategorized and tagged Action Figures, Beach Head, Cobra Commander, Firefly, GI Joe, Pursuit of Cobra, Snake Eyes, Toy Collecting. Bookmark the permalink.