Emotional Resonance, or the Importance of Toys (Part 1)

Posted on August 12, 2010 by canonball
Toys were my first friends. They also provided an important link to the “real” friends I would go on to make in my life. If another kid in my class was into Star Wars or GI Joe, then chances were we’d be instant best friends. However, while those friends would come and go, the toys remained, looking back at me from my shelves, reminding me that some things in life, no matter how seemingly frivolous, are permanent, and that a relationship as innocent as that which a boy keeps with his toys is one worth maintaining. There is a perfection to toys and a perfection in the relationship I have with them that transcends their “intended” purpose as childish distractions, or as something to be grown out of. Toys remind me that permanence is attainable. Toys also serve to remind me of relationships and friendships that have been lost to time, particularly the relationship I had with my mother, who first fostered my interest in collecting.
The first toys I remember owning, aside from random blocks and stuffed animals, were figures from the Mego superheroes collection, toys which would not gracefully survive my toddler years; toys which would also serve as a foundation for my life as an adult collector. The fate of my Mego toys was the fate of most toys owned by a 2 to 5-year-old – broken limbs, scratched paint, missing accessories, torn and frayed costumes, etc. Each nobly served its purpose as a child’s toy, but the true cornerstone that began a lifetime of collecting was still to come. 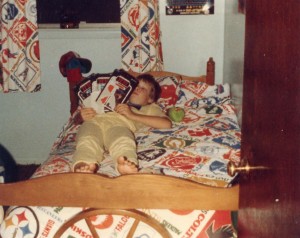 They tried to turn me into a jock, but Star Wars always wins!

Enter Star Wars. Star Wars, the movies and the toys, was a beast like no other before or since. I was interested in the property before I even saw the movie; there were two intriguing-looking robots featured prominently in all the ads I was flayed with, and that was enough for me. I was in. On one particular family shopping excursion we stopped by a toy store and the first “wave” of the Star Wars toys had just been put out. I grabbed for R2-D2 and C-3PO immediately, but Darth Vader also looked compelling enough to add to my burgeoning pile. My brothers helped me out by suggesting Luke Skywalker, a Stormtrooper, Ben Kenobi, and the Landspeeder. Naturally, I wasn’t leaving the store with this kind of haul, but my parents did grant me a few of the figures, R2 and 3PO among them. This was a defining moment in my life, the significance of which I would only appreciate much later. 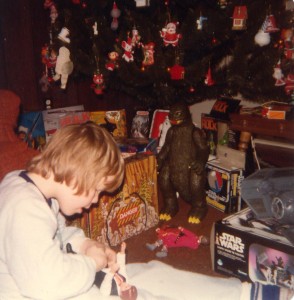 You should be looking at Godzilla. Not the hair, not me trying to get into Han's pants. Godzilla. Over there. *points*

For the next decade I was a toy collector. Specifically, an action figure collector. They enveloped me and sparked my imagination, and in return I would create worlds in which they would exist. It was largely a solitary world since there were no other children in my neighborhood to share this with and my brothers were all much older. A girl my age lived next door, but at that age, she may as well have been from Mars. Although from an outside vantage point it may have seemed solitary, it certainly didn’t feel solitary. Action figures were my companions and my world. I wanted, and knew, no other.

Hunting for new figures took on an importance for me that I suppose equaled the hunt that early man would engage in when hunting for food, or for mates; it consumed my every thought. Weekends meant trips to Kay-Bee, K-Mart, or Toys R Us. Sears and Service Merchandise were also fertile hunting grounds. Luckily, several of these spots were close together, so I could usually cajole my way into hitting a few of them in a single trip. 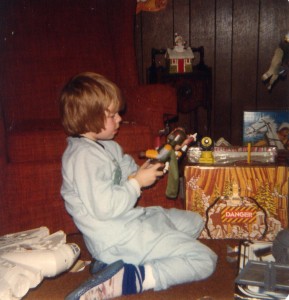 These trips were usually taken by just me and my mom, though sometimes my dad would accompany us and sit in the car while we went in the stores. In those days, what was available on the shelves was all I knew, unlike the present day where I’m aware of releases nearly a year in advance. That was better in many ways, but the feeling of finding something new that I didn’t know was coming was a thrill I won’t forget; finding a new wave, or even a single new figure, was a cause celebre. I can remember seeing an entire wall of Yodas at one particular Kay Bee and nearly losing my mind until I was able to fetch my mom and show her. Naturally, Yoda came home with us. Mom indulged my collecting, but did her best to keep me on a short leash. Mom and I were never closer than when we were hunting for figures. This lasted through Star Wars, on through GI Joe, Masters of the Universe, and The Transformers, among others. Until I was about 14, basically, when my attentions would shift to punk rock records and girls (Mars suddenly felt a whole lot closer).

Many years later, after I had long since moved out and was living in Boulder, CO, I received a phone call from my mom, who was a couple years into a terminal bout with cancer. Star Wars Episode I was coming, and the toys were released to much media hoopla, even making the news all over the country. She asked me if I had bought any, and of course I had, but then she broke down on the phone telling me she had wished she could have taken me to find them. I choked back my own tears and told her, “So do I,” doing what I could to keep it together during a very painful moment. Memories flooded back and I could remember every trip we took in that singular moment. Every moment of joy collecting had brought me with my mom came back to me, and in that moment I was once again the boy at her side, excitedly showing her the new Yoda. It was how we bonded in my youth, and it was how we bonded again then, on the telephone, nearly 1,500 miles apart. With tears welling up, we said our goodbyes, and I turned to admire my new Star Wars collection with the knowledge that time had moved on, and I was no longer that boy who lived in a world singularly populated with toys; I now had adult responsibilities and real relationships to maintain and nurture. But these figures served as a reminder of the happiness collecting has always brought me, and of a time when that was all that mattered. Not long thereafter, my mom passed away.

After the disappointment I, and the rest of the world, felt with Episode I, and after finally facing the facts that my rationalizations weren’t working, I sold my Episode I collection through one of my very first ebay transactions. For a time, that truly felt like that was it for me. But, of course, it wasn’t. Collecting is something that wouldn’t fade from my life, and even if I wasn’t actively collecting, I would still make it a point to visit Target’s toy aisle to see what was out, or I would find some excuse, no matter how flimsy, to visit Toys R Us, and I couldn’t help but think of my mom with each visit. I would go on to sporadically buy random McFarlane figures for the next few years, but it would be a few years still before the collecting bug would get me again. And boy, would it.

Canonball enjoys haunted houses, drinking fake egg nog, checking books out from the library and not reading them, and taking part in various types of online nerdery, like contributing to The Fwoosh and The Short Box.
View all posts by canonball →
This entry was posted in Toy collecting and tagged Action Figures, GI Joe, Star Wars, Toy Collecting. Bookmark the permalink.